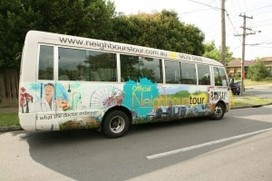 Everybody needs good neighbours, and that’s certainly what you’ll find here as Vermont South’s Pin Oak Court is the filming location for “Neighbours”. This soapie is the longest running drama in Australian television history, and a ‘Neighbours Tour Bus’ operates on a regular basis, attracting much interest from UK visitors.

Vermont South Shopping Centre takes care of all your shopping needs, with the Library & Community House conveniently located in neighbouring streets. Vermont South is also proud to be one of four Sustainable Street Hubs in the City of Whitehorse. A Hub is made up of a group of people who live in the same street, neighbourhood or suburb and have similar interests in living sustainably. The Sustainability Street Hub meets on a regular basis to learn about resource conservation in the home and local community, and to work on projects and events to raise awareness of environmental significance.